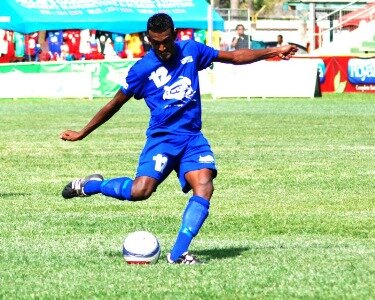 The second Western Derby of the league season took place at Govind Park where both teams were locked at 1-1 after full time.

Ba took an early lead but Lautoka came back through a Kenneth Onyema goal in the second half to secure a point from the match.

Before the match there were some major tactical changes in the lineup with Zibraaz Sahib starting at center back, Isikeli Jeke getting the nod upfront with National Team Striker Valerio Nawatu and Jone Sorolo taking over the role of Captain.

Ba took the lead in the 33rd Minute after a goal from former Blues Striker Osea Vakatalesau and went into half time with that 1-0 lead.

With the team down 1-0, Coach Sarju sent in Nigerian Kenneth Onyema in place of Earon Edwards.

The change paid dividends in the 53rd minute when Onyema scored a brilliant goal from an Arvindra Naidu cross. Following that both teams had some good opportunities to take the lead but failed to score either because of poor finishing or good goalkeeping.

Lautoka suffered a big blow when 15minutes from time Peni Finau received a red card. Ba took advantage of the situation and created many goal scoring opportunites, overpowering the Blues in terms of possession. Ba players failed to convert the opportunities into goals though as they were denied by the wood work on many occasions.

Man of the Match Kenneth Onyema was over the moon after scoring the equalizing goal and dedicated his goal to the fans.

I want to thank the fans for their support and for their patience with me and also to the coach for giving me this opportunity to play against a big rival.

Ba is good team and scoring against them makes me very happy and proud, Said Onyema.